Play dough, play dough,
It’s so fun to play,
You can make a bird,
A beautiful blue jay!

Who needs all these toys
When you become the maker
Of a colorful house,
That lays on a green acre.

I’m not a story maker!

How cool is that?

I know someone
That would make trees
And turtles and flowers
And tiny little bees.

I can make a butterfly,
I can make a fish,
The funniest part though,
Is when smashed and squished.

Let’s not buy toys
For sometimes I say,
Just get some play dough
It will save your day!

It will be okay!

An empty rocking chair won’t rock
If you don’t sit on it,
A lullaby won’t live
If you don’t sing,
A hand will be lonely
If you don’t hold another hand,
Words will disappear
If written on sand.
A heart will grow cold
Without the warmth of love,
A house without people
Cannot be called `home`,
We all need each-other
On bright days and gray ones,
I would not be `me`
Without everyone.

I decided today not to tell to my daughter ‘No!’, when she does simple mistakes such as how an animal should sound; I didn’t tell her ‘No!’ when she flipped too many pages through her book just to go to her favorite picture first; I didn’t get impatient when she ate lunch so slow by herself with out my help; I didn’t mind if she sat on the floor behaving like one of our dogs; I didn’t correct her when instead of saying ‘fish’ she says, “Cocoli!”, (How did she even came up with that? Hearing “fish” and saying “cocoli” are two way different words from each other). Today, I didn’t tell my husband to not give her any of his sugar coated cereal, (Yes, I’m one of those moms all about healthy food). I didn’t tell her ‘No!’ when she wanted to jump in a rain puddle.

TODAY I JUST WATCHED HER…

And I laughed, I smiled, and I cherished every little moment… when she wanted all her baby dolls and fluffy toys in her crib and when she wanted to eat a snack on our bed.

She will grow so fast and I want to stop and be able to be thankful about all these little things that make her the cutest. Feel the peace and beauty in the midst of all the changing diapers and training and learning and schedules.

TODAY I CHOSE TO BE THANKFUL.

I’m thankful that God chose me, in the midst of the imperfections I have and gave me this little perfect being, trusting me to be her mom.

When you are thankful it’s easy to see perfection in a mess.

You can paint with a brush

Those little chicks that blush.

You can paint with a color spray

A bird, a beautiful blue jay.

You can paint with your finger

A cold snowy day of winter.

You can paint with a sponge

You can paint with a leaf

The many colors of a reef.

You can paint with your feet

Walk on paper instead of the street.

You can paint with a color splash

You can paint with your marbles,

You can paint blowing bubbles.

You can paint using your toes

And paint a morning dew rose.

You can paint with blueberries

What you choose to paint with

It doesn’t matter much today.

It matters though if you paint or not

So bring some color to the grey! 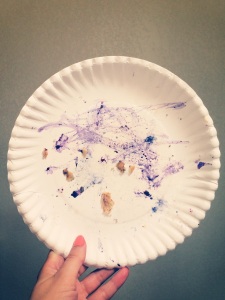 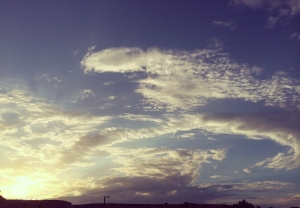 I took the train to the clouds
And got away from the crowds
With birds singing all the way
A peaceful song in my ears to play.
I saw many different faces
That I have seen in all those places
Where I lay down in soft, soft grass
Sipping lemonade from a jar of glass.
I saw sheep and bunny clouds
And trumpets that play loud
Shook hands with cats and dogs
And kissed a pink fluffy little frog.
Oh the things that I can think
In just one moment of an eye blink
When my dad lifts me in the air
I can’t help to dream, I swear!
And as my ‘dream train’ takes me away
Softly I close my eyes and pray
May all the children everywhere
Feel the love spreading in the air. 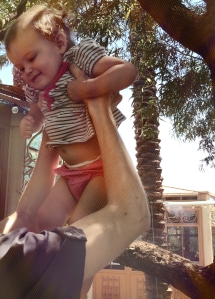 “A few will see the light at the end of a tunnel because a few are brave enough to walk faithfully through darkness without giving up.”

Watch the raindrops fly
Like dancers in the sky.
Then you can sing a song
With the rain along.
Then you open the door
Go outside explore!
A puddle a dancing floor,
Jump like never before!
Lift your head up high
And I’ll tell you why!
You’ll see the rainbow and the sun
Your day will be so fine and fun! 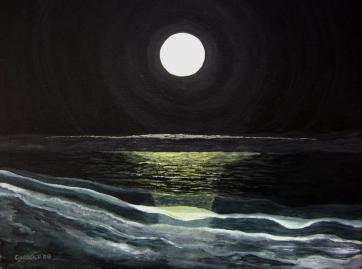 The two favorite recent words of my 16 month old daughter are “Goal!” and “No!” I don’t let her watch TV but this World Cup found me, as a stay home mom so I can stay home and enjoy all the games for the first time in 15 years. Mmmmm, life is good, isn’t it? Here are 10 thoughts about World Cup 2014.

1. Ideally, I would prefer to be in Europe or another country that is fond of football or how here in America people call it: Soccer! I had to google for places that show the games in Las Vegas where in Europe you find huge screens and people watching the games outside like you are in a stadium. Almost every coffee shop or bar will show the games and if the games are late at night and you want to go to a club, you can still dance and watch the game at the same time!

2. I live in a neighborhood with lots of Mexicans but I haven’t heard anyone so far screaming, “Goal!” and run outside in the front yard greeting the other neighbor.

3. I was surprised though how many Americans watched the game, USA-Ghana, cheering for their home team. I cheered for USA of course!

4. My husband had no clue of soccer before he met me, but now he text messages me to know about the score of each game and hear my thoughts about every game! I feel like a sport journalist! I would have become a good one!

5. For the first time, my thoughts about almost every game are the similar to my dad’s. He used to be a soccer player and he always thought I watched the games because of good looking guys, but who is the expert now?

6. Smaller teams are doing a phenomenal job and I never underestimated them because I have seen smaller teams rise and big teams fall. Don’t be surprised! It happens in soccer! I have been a fan all of my life and I can testify to this! Brazil can be beaten by Mexico, and Italy can almost always win against England and loose with Chile.

7.Commercials during World Cup are sooo good! Here are the links of two of my favorite ones!

8.I like the competition during the World Cup but also I like the atmosphere of togetherness that joins people from different countries. I get super competitive when my favorite team plays. Sometimes I need a break because I feel like I’ll have a heart attack and believe me, this is normal among soccer fans, males or females!

9. I said at the beginning that I don’t let my daughter watch TV but I keep it on during a game and it just so happens that she is not taking a nap. My beliefs about kids not spending a long time watching TV haven’t changed but it’s ok if she sees her mommy have it on for a soccer game. I want to create traditions for her and World Cup is on my list.

10. Which is my favorite team? America…or…ITALY? Well, now that I’m married to an American and live in USA, of course I cheer for them to win. Also, if USA does win, or even makes it close to the final match, soccer will be more popular and that means more people will like it and they’ll show it more on TV. I thought it strange that during the opening of the World Cup Ceremony, ESPN was showing golf. Really? Anyway, the team that I have cheered on since a little girl, and since Albania never made it into a World Cup, is Italy!!!! Vai Italia! Why Italy? Maybe I’ll write in another post if you are interested!

He gave up his dreams when he called me his

He started to see the world in this new bright bliss

He saw his wife become the best of all moms.

He treasured every moment we spent together

He said: I’ll always be your dad, every day, forever!

He held me on his shoulders at every soccer game

As long as I admired him, he didn’t search for fame.

He worked hard everyday, got blisters on his hands

I thought that was gross, I didn’t understand

On almost every birthday, he bought me new shoes

They were red and shiny, exactly what I’d choose.

He brought people home and animals in need

We didn’t have much but had enough to eat

He taught me to believe that love can break the ice

He taught me to see through other people’s eyes.

He taught me the toughest ones sometimes cry alone

He doesn’t talk much when he’s on the phone

But he gives the biggest smile that a man can be

And gives the biggest hug that is only for me.

As years have gone through and we have grown up

We live in great distance as shown on the map

You are deep in my heart where you should always be

In memories of mine, in my love, you live next to me.